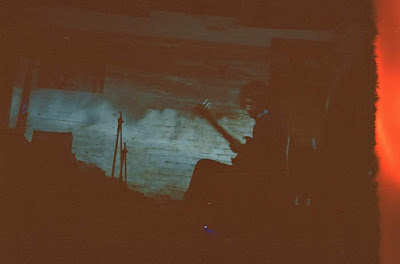 JON COLLIN is a musician from Lancashire, UK, now based in Stockholm, Sweden. He has released several LPs of freeform abstract guitar blues and several more short-run releases of through-composed drone works. He is interested in, amongst other things, recontextualising the role of the recording musician through outdoor recording and interactions with natural, mechanical and biological ambient sounds. As an artist his visual-conceptual work includes the long-term tape label project Winebox Press. His most recent LP releases are The Nature (Early Music, 2017) and Water and Rock Music Volume 1 (Feeding Tube, 2018).

BILL NACE is a guitar mistreater capable of conjuring swarms of noise clouds, textural splat bombs, and a huge range of other sonic malarky depending on the situation.

"Special Guests" – This is not a coy surprise, they just have yet to come up with a proper name. Tara (Fursaxa), Nathalie, and Brooke combine voice, harmonium, and guitar drones deep into the heart of the mystery zone. 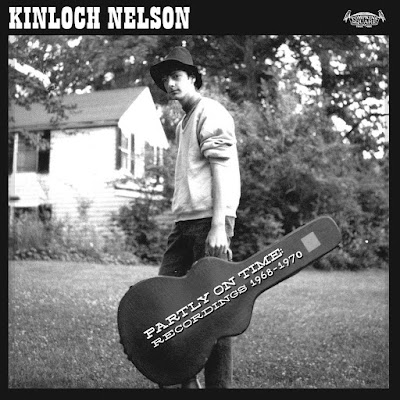 Clavius Productions presents the Philadelphia debut of Rochester NY's Kinloch Nelson, a 69 year old acoustic guitarist who just released his first album on Tompkins Square. Nelson has been playing and teaching in the Rochester/Buffalo/upstate NY region for 50 years but has rarely ventured far from there. Saxophonist/throat singer Kyle Press (Love Club/Impressionist) and percussionist Scott Verrastro (Kohoutek/Curanderos) will perform as a duo for the first time. Starts at 8 sharp and will be done by 10! Plus Brickbat is one of the best bookshops in the city, so come by and browse and listen to some challenging acoustic music.

Kinloch (sounds like “kin-law”) Nelson (b. 1950) studied classical guitar privately with Stanley Watson, jazz guitar with Gene Bertoncini at Eastman School of Music, and music theory at the University of Rochester. In 1973, he began teaching both privately and at The Hochstein Music School where he was on the faculty for twenty-five years. In 1985, Nelson co-founded the Guitar Society of Rochester, which during its ten-year run presented many of the world’s greatest guitarists. Nelson is the author of a book, Alternate Guitar Tunings. He currently teaches privately, conducts guitar workshops and maintains a performance schedule.

"Some time in the turbulent summer of 1968 I went to visit my sister who was studying theater at Dartmouth College that semester. Big stages, spotlights, cat walks, backstage access – it was pretty exciting stuff for a high school kid from a small town. One night we walked across campus to check out the college’s radio station, WDCR. She had a friend, Dave Graves, who was doing a nightly radio show there and she figured I needed to see this. I walked into the station and time stopped. I had spent many an hour, pretty much from the crib on up, glued to AM radios, soaking up the music and the mystery. And now, here was the real deal. I took a look around: there was a production room with a couple Ampex tape recorders, a mixing console, fancy microphones and a recording room. Hmmm… So, I called up my high school friend Carter Redd and said, “Get on a bus and come on up and record.”

Since late 1967 Carter and I had been playing guitars together, working on songs of the day: Simon & Garfunkel, Bob Dylan, Donovan. Before long we were writing songs and instrumental guitar tunes. We borrowed someone’s Sony reel-to-reel tape recorder and started making recordings. But, WDCR raised the bar. Somehow we persuaded Dave Graves to record us, and that’s how these recordings came about. Recorded at various times in the summers of ’68, ’69, and ’70, and in the winter break of ’69-’70, three of the songs in this collection are ones we did together, the rest are solo tunes of mine.

The first two songs we recorded were “Funky Susan” and “Partly On Time.” “Funky Susan” was Carter’s invention; I added the harmonica part and the second guitar part. “Partly On Time” we wrote together. “Lazin’ In my Sleep” was done a year later. Dave engineered the first two, and a few months later he took a chance and sent them off to John Phillips of The Mamas And Papas. Phillips was looking for new acts to produce and, sure enough, he liked what he heard. Months went by…then out of the blue he sent word for us be at a recording studio in Connecticut one day in January of 1969 to record a Mason Williams song which he figured we could learn and record. It never happened. Carter, a year ahead of me, had already graduated and taken off for a drive across the country. He was nowhere to be found, and there were no cell phones in those days. Weeks went by. Phillips, engrossed in producing the film “Monterey Pop” eventually lost interest. I’ve often wondered what might have happened had we recorded all these tunes for him and put them out way back then…

In the summer of 1969 I went back and recorded some more, this time alone, and was there when Apollo 11 landed on the moon. The first rumors of the coming Woodstock Music And Art Fair were circulating. FM underground radio was emerging. Music genres were cross pollinating. It was an exciting time to be writing music. Carter and I went back to WDCR to record again that winter, and I went again by myself in the summer of 1970 to work at the station and record some more. But after those days, we pretty much went our separate ways. Sadly, somehow during all this the master tapes got lost or erased. The tapes that survived are copies.

So, one night in the summer of 1970, after I recorded “Kittens,” Tom Siebert’s Boat,” and “Winnipesaukee Night,” a friend of mine and I were listening to the tapes on my crummy little stereo and decided to take them over to his house to play them on his dad’s amazing hi-fi set. Off we drove with the tapes, my new tape recorder and my guitar in our family car. There’s an intersection in my hometown where a town road crosses a highway. That night as we were crossing the highway, a drunk driver, running from an accident he had caused at the previous light, ran the red light and hit us broadside. Wham! The car folded in half, the windows shattered, our car spun around 180 degrees and the tape recorder and all my tapes flew out the window and landed all over the highway. I should have been killed, but fortunately the driver hit the brakes and crashed into the passenger door just behind me. Amazingly we survived with only whiplash! My guitar, a 1960s era Gibson J-50, was in the back seat and didn’t fare as well, taking the full brunt of the crash. But the tapes and the recorder survived, and no one ran over them. I never met the driver. He was immediately taken to the hospital. He never showed up in court. They jailed him. The insurance company replaced our car, gave us some cash and I bought a brand new Martin D-18. And, they let me keep the J-50, which I later fixed.

That tape recorder has long since failed, but the tapes held up. I never thought they could be released commercially because, being copies, the quality wasn’t that good. Over the years I figured I would re-record the songs. But ultimately I never did, because how can one recapture the original mindset, feeling, vibe of the times and in particular the sound of that now-replaced studio? But thanks to the digital era the tapes have cleaned up reasonably well and the songs have come to life.

As I write this, I am sitting in a hotel room in, of all places, Woodstock NY. At the concert here last night I happened to play one of the songs from those tapes, “Kittens.” And now, looking back, it occurs to me that the wrecked family car was the same one my sister and I drove in to that infamous Woodstock Music And Art Fair…that same summer in which I wrote and recorded that song…back when all of these songs were spinning constantly in my head. Now, half a century later, I guess they still are…Cheers"  (K. Nelson) 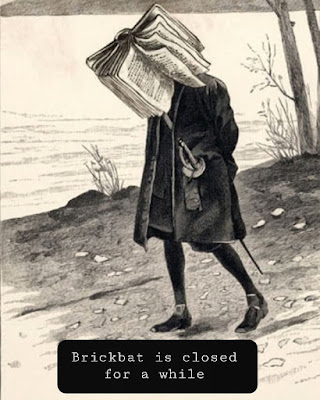 709 South 4th Street
Philadelphia, PA 19147
We are closed as we move through the COVID-19 pandemic, but are accepting book and gift card orders for shipping, and can be open by appointment. Email us with inquiries.
brickbatbooks@gmail.com
Instagram: brickbatphilly
We buy books: Everything from Artist's Monographs to Pulp Fiction; Children's Books to Poetry.
Contact us for more information.